Masticationpedia is a Charity, a non-profit organisation under British law (UK). Its purpose is to promote studies on mastication.

Dissemination of knowledge in the field of chewing neurophysiology

Masticationpedia aims to actively contribute to the dissemination, improvement and advancement of knowledge and culture in the field of rehabilitation of the masticatory system by promoting the production, collection and dissemination of free content (Open Content).

It also aims to encourage accessing knowledge and training. In addition to this, it focuses on enhancing the knowledge and awareness of social and philosophical issues concerning the progress of science, such as paradigmatic innovation and the liberal implementation of medical updating. 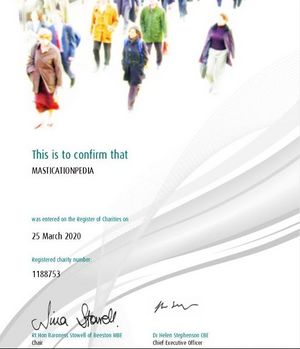 Masticationpedia's admittance as a Charity

"Free content" means, as intended by Masticationpedia, the complex of all works that have been released by their authors with a licence that allows their derivative elaboration and/or free distribution.

The spread of knowledge will be promoted mainly through a web platform whose domain is www.masticationpedia.org which contents will be produced only by authors who will have been selected for their verified scientific and clinical contributions. Corrections and placement of articles, therefore, will not be open to everyone (as it happens, for example, in the case of Wikipedia, from which we differ in terms of purposes and product).

The selection of authors for the edition and a review of them will take place through a detailed analysis of the scientific contents produced by each author on verifiable databases (such as, but not limited to, Pubmed, Medline etc.). After verifying the reliability and consistency of the scientific value of these contents, the drafting of a topic, to be included in Masticationpedia, will be proposed to the prospective author. For this reason, a Scientific Community has been set up in Masticationpedia consisting of the Founding Members (doctors / dentists) and honorary members such as researchers and scientists dealing with the subjects under consideration, as well as bioengineers, mathematicians and physicists.

Masticationpedia operates mainly through direct and personal action of its members; however, it may enter into agreements or conventions with any public or private entity or body, companies, or other associations if the need or opportunity arises.

The purpose of the diffusion of clinical paradigmatic innovation into the field of masticatory system rehabilitation consists in a change in mental habit that is opposed to a mechanistic and deterministic vision of the pathophysiology of the masticatory system.

This model should be replaced with a stochastic vision and in this sense the paradigmatic clinical innovation will allow matching the current diagnostic model, based on the statistical inference of the symptom, with a dynamic stochastic interpretation of "complex systems" such as the central and peripheral nervous system.

The diffusion of clinical paradigmatic innovation will be explained in the following ways:

The dissemination will, therefore, be understood as a transfer of scientific knowledge to citizens, passing through agreements, experimental projects at universities, hospitals and research centers, various other fora and refresher courses. It would also mean online and offline dissemination of the most accredited procedures currently in the field of neurophysiology, in general, and in trigeminal nervous system and masticatory system in particular. 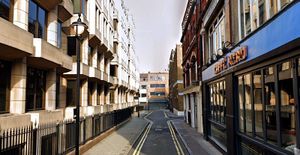