This is free scientific content. It has been released with a free license, this is why we can present it here now, for your convenience. Free knowledge, free access to scientific knowledge is a right of yours; it helps Science to grow, it helps you to have access to Science

This content was relased with a Template:CC BY-NC license.
You might perhaps wish to thank the Author/s

The intimate anatomical relationship of the facial nerve to the parotid parenchyma has a significant influence on the presenting signs and symptoms, diagnosis and treatment of parotid neoplasms. However, to our knowledge, hyperactivity of this nerve, presenting as facial spasm, has never been described as the presenting sign or symptom of a parotid malignancy. We report a case of carcinoma arising in a recurrent pleomorphic adenoma of the left parotid gland (i.e., carcinoma ex pleomorphic adenoma) that presented with hemifacial spasms. We outline the differential diagnosis of hemifacial spasm as well as a proposed pathophysiology. Facial paralysis, lymph node enlargement, skin involvement, and pain have all been associated with parotid malignancies. To date the development of facial spasm has not been reported with parotid malignancies. The most common etiologies for hemifacial spasm are vascular compression of the ipsilateral facial nerve at the cerebellopontine angle (termed primary or idiopathic) (62%), hereditary (2%), secondary to Bell’s palsy or facial nerve injury (17%), and hemifacial spasm mimickers (psychogenic, tics, dystonia, myoclonus, myokymia, myorthythmia, and hemimasticatory spasm) (17%). Hemifacial spasm has not been reported in association with a malignant parotid tumor but must be considered in the differential diagnosis of this presenting symptom.

The intimate anatomical relationship of the facial nerve to the parotid gland has a significant influence on the symptoms/signs, diagnosis, and treatment of parotid neoplasms[1]. Involvement of the facial nerve by parotid malignancies usually results in partial or total hemifacial paralysis[2]. However, to our knowledge, hyperactivity of this nerve presenting as facial spasm has not been reported as the presenting feature of a malignant parotid tumor. Facial spasm has nonetheless been reported twice in the literature as a presenting feature of a benign parotid tumor[3]. We report a case of carcinoma arising in recurrent pleomorphic adenoma (i.e., carcinoma ex pleomorphic adenoma) that presented with hemifacial spasms. We outline the differential diagnosis of hemifacial spasm as well as a proposed pathophysiology.

This is a single institutional case report in a tertiary referral hospital. Institutional Review Board was not required to report one case at our institution.

A 56-year-old female smoker had a history of a pleomorphic adenoma in the left parotid gland treated with a superficial parotidectomy at the age of 18. Nineteen years following that surgery, the patient presented with multifocal recurrence. Surgical exploration was undertaken and the tumor was found inseparable from the facial nerve. At that time, the resection was abandoned and the facial nerve was not sacrificed and gross disease was left in the parotid bed. The patient underwent external beam radiation therapy and the size of the tumor remained stable for 10 years on serial computed tomography (CT) and magnetic resonance imaging (MRI) monitoring. The patient had been clinically asymptomatic until she started developing intermittent ipsilateral hemifacial spasms occurring spontaneously and involving all portions of the left facial musculature, which prompted her to return for evaluation.

Repeat CT scan showed enlargement of avidly and uniformly enhancing solid tumor without areas of necrosis or extracapsular extension with extension into the left stylomastoid foramen, along with suspicious changes in enlarged (15 mm) left level IV lymph node (Figure ​(Figure1A).1A). Fine-needle aspiration biopsy of the tumor was suspicious for carcinoma ex pleomorphic adenoma. After a negative systemic metastatic work-up, the patient was brought to the operating room for a radical parotidectomy with facial nerve sacrifice, ipsilateral selective neck dissection (levels I-IV), and a de-epithelialized anterolateral thigh free flap for volume restoration and to enhance wound healing. The vertical segment of the facial nerve in the mastoid was exposed. Primary facial nerve repair was performed using sural nerve grafting from the main trunk to the temporal branch of the facial nerve, nerve to masseter grafting to the dominant midfacial branches of the facial nerve, together with construction of an oral commissure suspension with a fascia lata sling.

Figure 1 Axial computed tomography of the neck with contrast demonstrates oval shaped enhancing lesion of the left parotid gland deep to the left ramus of the mandible, centered at the left stylomandibular tunnel. A: The lesion measured 9 mm × 7 mm × 8 mm in 2007; B: The lesion measured 3.1 cm × 2.8 cm × 4.5 cm in 2015.

Final surgical pathology confirmed a 5.2 cm pleomorphic adenoma with a multinodular growth pattern. Well-circumscribed neoplastic nodules of variable sizes were embedded in densely fibrotic connective tissue (Figure ​(Figure2).2). Nerve bundles were also entrapped in the scar tissue in-between the nodules, but no true perineural invasion was detected. Within the nodules, two foci of early non-invasive carcinoma were noted. Within one nodule a 4 mm focus of malignant cells surrounded by benign epithelial elements was identified. In a separate nodule, an intraductal malignant neoplastic proliferation with an intact benign myoepithelial cell rim was also noted. None of the malignant neoplastic foci showed invasion into adjacent fibroadipose tissue and nerves. Thirteen level II-V lymph nodes were negative for tumor involvement. The primary tumor was staged as rT4N0M0. 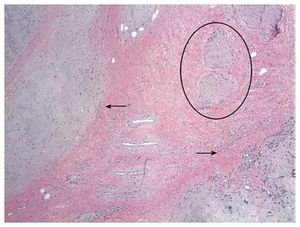 The hemifacial spasms subsided after surgery, and the patient remains disease free at 6 mo of follow-up. The patient has recovered facial tone but has yet to develop dynamic muscular activity.

Treatment of recurrent pleomorphic adenoma involves primary surgery that can either be a superficial or total parotidectomy based on the site of the recurrence and the extent of previous facial nerve exploration[6]. Adjuvant radiotherapy is another treatment option that is suitable for patients whose tumor is not completely excised[6]. According to Witt et al, retrospective analysis provides evidence that radiotherapy improves local control of this tumor[6]. The risk of malignant change in salivary glands following radiation therapy to the neck in 11047 patients with Hodgkins Lymphoma was investigated by Boukheris et al[7]. They reported that 21 patients developed salivary gland carcinoma with an observed-to-expected ratio of 16.9 and a confidence interval of 95%[7]. The risk was highest in patients under 20 years of age and those who survived more than 10 years[7].

Carcinoma ex pleomorphic adenoma may present with pain when it is associated with invasion of local tissues[2]. Involvement of the facial nerve causes facial paresis or palsy[2]. Olsen et al[9] reported that 32% of the patients in their series had facial nerve involvement manifesting as partial or complete facial muscle weakness. Rarely, patients presented with skin ulceration, tumor fungation, skin fixation, palpable lymphadenopathy and dysphagia[2].

No case of hemifacial spasms or twitching associated with carcinoma ex pleomorphic adenoma or any other parotid or submandibular gland malignancies has been reported in the literature. The only malignant neoplasm presenting with facial spasm that we identified in the literature was a malignant astrocytoma located at the cerebellopontine angle[10]. Following resection of that tumor, the facial spasms resolved[10]. The two cases of hemifacial spasm have been reported with benign parotid tumors. Behbehani et al[11] reported the case of a 47-year-old man who presented with a right parotid mass and hemifacial spasm. The hemifacial spasms did not abate following surgery, but responded 8 mo later to botulinum toxin-A injections[11]. Destee et al[3] also reported a case of a pleomorphic adenoma in a 70 year-old man who presented with hemifacial spasms. During total parotidectomy, it was noted that the facial nerve was pale and appeared ischemic[3]. The hemifacial spasms reduced 8 days post operatively and had almost completely subsided within 6 mo[3].

The most common causes of hemifacial spasm are vascular compression of the ipsilateral facial nerve at the cerebellopontine angle (termed primary or idiopathic) (62%), hereditary (2%), secondary to Bell’s palsy or facial nerve injury (17%), and hemifacial spasm mimickers (psychogenic, tics, dystonia, myoclonus, myokymia, myorthythmia, and hemimasticatory spasm) (17%)[12]. In addition to a thorough history and a complete neurological examination, some authors recommend magnetic resonance imaging and angiography of the cerebellopontine angle[12]. However, such imaging may not be cost-effective in all patients[13], as the presence of an ectatic artery on magnetic resonance imaging may not be specific for hemifacial spasms[12]. Therefore, this may be reserved for patients with atypical features such as numbness and weakness[13]. 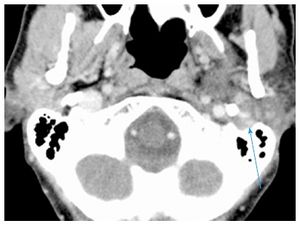 The authors postulate that in this patient the hemifacial spasm commenced with the onset of the malignant transformation in the recurrent pleomorphic adenoma in the parotid gland. In the absence of any evidence of perineural invasion, we believe that peri-tumoral inflammatory responses caused the neural stimulation that resulted in hemifacial spasm. This patient did not have any prior ear surgery or any other known etiology to account for this symptom. An alternative explanation to the patient’s neurological symptoms is external compression to the facial nerve. This could be related to the dense fibrotic tissue surrounding both tumor nodules and nerves or to direct tumor extension into the left stylomastoid foramen[14] (Figure ​(Figure3).3). The latter mechanism has been previously proposed by Blevins et al[14].

The authors would like to acknowledge the generous support of this research by the Mount Sinai Health System and the THANC Foundation.

A 56-year-old female with a history of recurrent pleomorphic adenoma of the left parotid gland treated with surgery and external beam radiation therapy presented with ipsilateral hemifacial spasm.

The clinical diagnosis is a malignant change in a parotid pleomorphic adenoma with involvement of the facial nerve.

The differential diagnosis is the stimulation of facial nerve by perineural invasion or an inflammatory reaction caused by malignant parotid tumor.

A radical parotidectomy with facial nerve sacrifice, ipsilateral selective neck dissection (levels I-IV), and a de-epithelialized anterolateral thigh free flap was performed. A sural nerve grafting from the main trunk of the facial nerve to its branches and an oral commissure suspension with a fascia lata sling was done.

The authors postulate that the hemifacial spasm commenced with the onset of the malignant transformation in the recurrent pleomorphic adenoma in the ipsilateral parotid gland. In the absence of any evidence of perineural invasion, they believe that peri-tumoral inflammatory responses caused the neural stimulation that resulted in hemifacial spasm.

This is the first reported case of malignant transformation of a recurrent pleomorphic adenoma in a parotid gland presenting with ipsilateral hemifacial spasm. In the absence of evidence of perineural invasion of the ipsilateral facial nerve, it is postulated that peri-tumoral inflammatory responses were responsible for the excitation of this nerve and the resultant hemifacial spasm.

Institutional review board statement: This case report was exempt from the Institutional Review Board standards at Mount Sinai Beth Israel in New York.

Informed consent statement: This case report was exempt from obtaining informed consent based on Institutional Review Board standards at Mount Sinai Beth Israel in New York.

Conflict-of-interest statement: All the authors have no conflict of interests to declare.