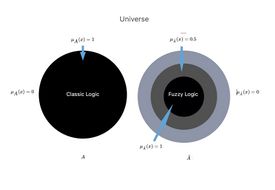 In this chapter, we will discuss fuzzy logic. It is called fuzzy because it is characterized by a gradualness: an object can be attributed a quality that can have various degrees of truth.

In the first part of this chapter, the meaning of graded truth will be conceptually discussed, while in the second part, we will delve into the mathematical formalism by introducing the membership function

: the element that allows us to mathematically synthesize the nuances of this logic of language. It has been possible to show that with ‘fuzzy’ reasoning, unlike the previous logics of language, the diagnoses show less uncertainty. Despite this, however, the need is still felt to further refine the language method and enrich it with further ‘logics’.

We have come this far because, as colleagues, are very often faced with responsibilities and decisions that are very difficult to take and issues such as conscience, intelligence and humility come into play. In such a situation, however, we are faced with two equally difficult obstacles to manage that of one

(Knowledge Basis), as we discussed in the chapter ‘Logic of probabilistic language’, limited in the time that we codify in

limited in the specific context (

). These two parameters of epistemology characterize the scientific age in which we live. Also, both

are dependent variables of our phylogeny, and, in particular of our conceptual plasticity and attitude to change.[1]

«I'm not following you»
(I'll give you a practical example)

Pubmed responds with 2862 articles in the last 10 years[2][3], so that we can say that ours is current and is sufficiently updated. However, if we wanted to focus attention on a specific topic like ‘Temporomandibular Disorders’, the database will respond with as many as 2,235 articles. [4] Hence, if we wanted to check another topic like ‘Orofacial Pain’, Pubmed gives us 1,986 articles.[5] This means that the

for these three topics in the last 10 years it has been sufficiently updated.

If, now, we wanted to verify the interconnection between the topics, we will notice that

in the contexts will be the following:

The example means that the

is a time dependent variable while the

is a cognitive variable dependent on our aptitude for the progress of science, as already mentioned—among other things—in the chapter ‘Introduction’.

«you almost convinced me»
(Wait and see)

We ended the previous chapter by asserting that the logic of a classical language and subsequently probabilistic logic have helped us a lot in the progress of medical science and diagnostics but implicitly carry within themselves the limits of their own logic of language, which limits the vision of the biological universe. We also verified that with the logic of a classical language—so to speak, Aristotelian—the logical syntax that is derived from it in the diagnostics of our Mary Poppins limits, in fact, the clinical conclusion.

argues that: "every normal patient

which is positive on the radiographic examination of the TMJ

, as a direct consequence

then Mary Poppins is also affected by TMDs

The limitation of the logical path that has been followed has led us to undertake an alternative path, in which the bivalence or binary nature of classical language logic is avoided and a probabilistic model is followed. The dentist colleague, in fact, changed the vocabulary and preferred a conclusion like:

and which is, that our Mary Poppins is 95% affected by TMDs since she has a degeneration of the temporomandibular joint supported by the positivity of the data

in a population sample

. However, we also found that in the process of constructing probabilistic logic (Analysandum

) which allowed us to formulate the aforementioned differential diagnostic conclusions and choose the most plausible one, there is a crucial element to the whole Analysand

represented by the term

which indicates, specifically, a 'Knowledge Base' of the context on which the logic of probabilistic language is built.

For a widely shared form of the representation of reality, supported by the testimony of authoritative figures who confirm its criticality. This has given rise to a vision of reality which, at first glance, would seem unsuitable for medical language; in fact, expressions such as ‘about 2’ or ‘moderately’ can arouse legitimate perplexity and seem an anachronistic return to pre-scientific concepts. On the contrary, however, the use of fuzzy numbers or assertions allows scientific data to be treated in contexts in which one cannot speak of ‘probability’ but only of ‘possibility’.[8]

In the ambitious attempt to mathematically translate human rationality, it was thought in the mid-twentieth century to expand the concept of classical logic by formulating fuzzy logic. Fuzzy logic concerns the properties that we could call ‘graduality’, i.e., which can be attributed to an object with different degrees. Examples are the properties ‘being sick’, ‘having pain’, ‘being tall’, ‘being young’, and so on.

Mathematically, fuzzy logic allows us to attribute to each proposition a degree of truth between

. The most classic example to explain this concept is that of age: we can say that a new-born has a ‘degree of youth’ equal to

, an eighteen-year-old equal to

, a sixty-year-old equal to

In the context of classical logic, on the other hand, the statements:

are both true. However, in the case of classical logic (which allows only the two true or false data), this would mean that the infant and the thirty-year-old are equally young. Which is obviously wrong.

The importance and the charm of fuzzy logic arise from the fact that it is able to translate the uncertainty inherent in some data of human language into mathematical formalism, coding ‘elastic’ concepts (such as almost high, fairly good, etc.), in order to make them understandable and manageable by computers.

As mentioned in the previous chapter, the basic concept of fuzzy logic is that of multivalence, i.e., in terms of set theory, of the possibility that an object can belong to a set even partially and, therefore, also to several sets with different degrees. Let us recall from the beginning the basic elements of the theory of ordinary sets. As will be seen, in them appear the formal expressions of the principles of Aristotelian logic, recalled in the previous chapter.

Given the whole universe

its generic element so that

; then, we consider two subsets

The theory of fuzzy language logic is an extension of the classical theory of sets in which, however, the principles of non-contradiction and the excluded third are not valid. Remember that in classical logic, given the set

, the principle of non-contradiction states that if an element belongs to the whole

it cannot at the same time also belong to its complementary

; according to the principle of the excluded third, however, the union of a whole

In other words, if any element does not belong to the whole, it must necessarily belong to its complementary.

We choose - as a formalism - to represent a fuzzy set with the 'tilde':

. A fuzzy set is a set where the elements have a 'degree' of belonging (consistent with fuzzy logic): some can be included in the set at 100%, others in lower percentages.

To mathematically represent this degree of belonging is the function

is a continuous function defined in the interval

The graphical representation of the function

can be varied; from those with linear lines (triangular, trapezoidal) to those in the shape of bells or 'S' (sigmoidal) as depicted in Figure 1, which contains the whole graphic concept of the function of belonging.[9][10]

Figure 1: Types of graphs for the membership function.

; on the other hand, the core is defined as the area in which the degree of belonging assumes value

The 'Support set' represents the values of the predicate deemed possible, while the 'core' represents those deemed more plausible.

represented a set in the ordinary sense of the term or classical language logic previously described, its membership function could assume only the values

depending on whether the element

belongs to the whole or not, as considered. Figure 2 shows a graphic representation of the crisp (rigidly defined) or fuzzy concept of membership, which clearly recalls Smuts's considerations.[11]

Let us go back to the specific case of our Mary Poppins, in which we see a discrepancy between the assertions of the dentist and the neurologist and we look for a comparison between classical logic and fuzzy logic: 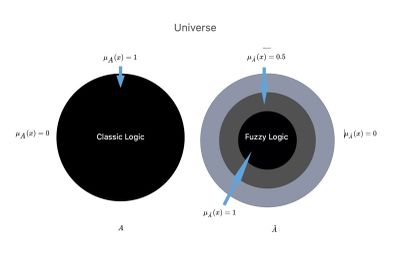 Figure 2: Representation of the comparison between a classical and fuzzy ensemble.

in which there are two parallel worlds or contexts,

In the scientific context, the so-called ‘crisp’, and we have converted into the logic of Classic Language, in which the physician has an absolute scientific background information

with a clear dividing line that we have named

In another scientific context called ‘fuzzy logic’, and in which there is a union between the subset

that we can go so far as to say: union between

We will remarkably notice the following deductions:

Topics that could distract the reader’s attention were, in fact, essential for demonstrating the message. Normally, indeed, when any more or less brilliant mind allows itself to throw a stone into the pond of Science, a shockwave is generated, typical of the period of Kuhn’s extraordinary science, against which most of the members of the international scientific community row. With good faith, we can say that this phenomenon—as regards the topics we are addressing here—is well represented in the premise at the beginning of the chapter.

In these chapters, actually, a fundamental topic for science has been approached: the re-evaluation, the specific weight that has always been given to

, having undertaken a more elastic path of Fuzzy Logic than the Classical one, realizing the extreme importance of

and ultimately the union of contexts

to increase its diagnostic capacity.[12][13]

In the next chapter we will be ready to undertake an equally fascinating path: it will leads us to the context of a System Language logic, and will allow us to deepen our knowledge, no longer in clinical semeiotics only, but in the understanding of system functions (recently it is being evaluated in neuromotor disciplines for Parkinson's disease).[14]In Masticationpedia, of course, we will report the topic 'System Inference' in the field of the masticatory system as we could read in the next chapter entitled 'System logic'.